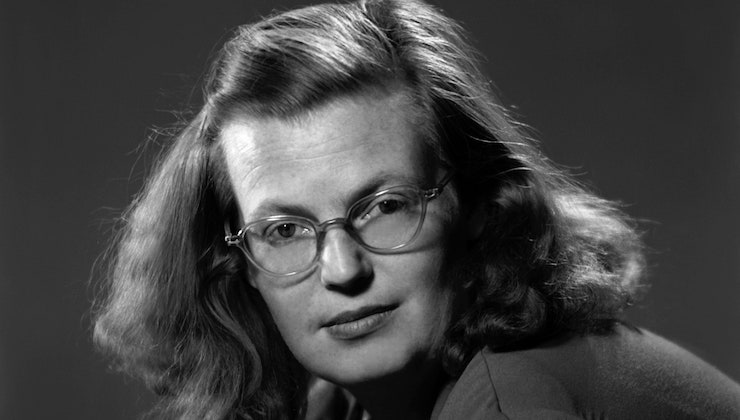 Over the last few years, Shirley Jackson has passed from being an underappreciated writer to being a cult icon. The award named in her honor is now thirteen years old; there is a Ruth Franklin’s Shirley Jackson: A Rather Haunted Life, a celebrated chonk of a biography that serves as a critical appreciation of her work as well as an exploration of her personal life; there is Shirley, a novel by Susan Scarf Merrell that casts her as a fictional hero in a creepy mystery. Filmmaker Josephine Decker has now adapted the novel into a movie starring Elisabeth Moss as Jackson, Michael Stuhlbarg as her emotionally overbearing husband, Stanley Hyman, and Logan Lerman and Odessa Young as Fred and Rose Nemser, the young couple that falls under Shirley’s spooooky influence. Since we’re hoping that the movie will inspire even more people to read her writing, and since no live organism should continue for long to exist sanely without fantastic horror writing in their life, I’ve collected nine books by authors whose work recalls Jackson’s creepy spirit.

A lot of Angela Carter’s work could be described with some combination of the words “dark,” “haunting,” and “fairy tale”—but in The Magic Toyshop she focuses the whole story on the ways gender, sexuality, and class intersect in a way that feels akin to Shirley Jackson’s spirit. An orphaned girl is sent to live with her abusive toymaker uncle (that’s at least two squares on your Angela Carter bingo card) and put to work in his toy shop. Since she’s a girl, her uncle is dismissive of the idea that she needs to plan for any future other than manual labor and marriage, which is awful enough, but she’s also suddenly fielding romantic overtures from her cousin? And then most of the family is forced to star in the toymaker’s uncanny puppet plays, and the book goes from kitchen sink drama to creepy puppet horror.

Get in Trouble, Kelly Link

All of Kelly Link’s books could be on this list, but I’m including Get in Trouble, Link’s fourth collection of short stories, because it opens with a direct reply to one of Jackson’s own stories. Where Jackson’s “The Summer People” is a chilling story about an insular New England town that doesn’t appreciate it when city folk stay past Labor Day, Link’s story of the same title is an openly fantastical tale about a girl named Fran who wants to escape a magical debt. The rest of the collection jumps between ghost-hunts, Ghost Boyfriends, superheroes who are on break, and pocket universes that serve as perfect vacation destinations.

Things We Lost in the Fire, Mariana Enríquez

This short story collection flows between real life, everyday horrors like domestic violence, police corruption, and deadly inequality, and the more supernatural horrors of dark magic and eerie disappearances. Set in modern Argentina, these stories are infused with the brutality of the country’s past, exhuming the facts of what it was like to live under a military dictatorship, to see neighbors taken away to be tortured, to see children kidnapped. Enríquez confronts that history with a kind of surrealism that links her back to forebears like Borges, Cortázar, and Arlt—because how else can you write about something as terrible as a child being raised by the very people who murdered her parents, but through the lens of a ghost story?

Mr. Splitfoot is one of those overstuffed suitcase-type novels that pops open with ideas and beautifully-drawn characters and bits of weird history that tie into the plot, and it is, from beginning to end, literally and figuratively, haunted as heck. It’s idiosyncratic and completely itself. The book crosscuts between two main plots: in the early 1990s, Nat and Ruth live under the harsh care of the Gods Love! foster home, making money by traveling rural Upstate New York and speaking to the dead; nearly twenty years later, Ruth’s niece Cora is trapped in a bad relationship and an unexpected pregnancy. Ruth shows up out of the blue to take Cora on a long winding trip across New York’s Burned-Over District, and along the way the younger woman learns about her family’s past, prepares for motherhood, and encounters ghost upon ghost upon ghost—some metaphorical, but most quite real.

We Ride Upon Sticks, Quan Barry

The 1989 Danvers High School Women’s Varsity Field Hockey Team is tired of sucking. They lose all the time, and it’s simply exhausting. So they break out a shiny notebook with Emilio Estevez’s face on the cover and write an oath pledging themselves to the powers of darkness in exchange for success. Of course it works, because the powers of darkness were basically everywhere in the ‘80s. Soon the Field Hockey Team embrace witchcraft far more seriously than any of the poor women who were martyred in that town down the road, but Emilio is never sated. They carry out dark deeds and giving themselves over to terrible rituals—but they’re also winning games and getting a lot more dates than before, so isn’t it all worth it in the end? The question remains: is the dark magic real, or is their new success fueled by the propulsive drama that only a group of teenage girls can concoct? And if it is that, isn’t that a force more powerful than any amount of witchcraft?

Ruth Franklin’s biography of Shirley Jackson is an obvious pick for this list, but it’s an exhaustively-researched, comprehensive look at Jackson’s life as a writer. Rather than focusing on Jackson’s life as the center of a literary circle that also included Ralph Ellison, or on her habit of baiting the press with the idea that she was maybe possibly actually a practicing witch, Franklin organizes each chapter around landmarks in Jackson’s career, and then dips back and forth between the professional and the personal to show how Jackson’s family, her, um, not great relationship with her husband, and her own obsessions influenced her work. Because of this, her writing gets its due, and readers get to see Jackson as a working artist of her time, part of a literary lineage whose work was in conversation with its culture.

The Grip of It, Jac Jemc

If you love The Haunting of Hill House, and you haven’t read The Grip of It, GO READ THE GRIP OF IT. Jac Jemc’s book is maybe the best heir we’ve gotten yet to Jackson’s classic haunted house tale. Jemc sets up perfect scenario: a young interracial couple who have already had some bumps in their relationship find what seems like a perfect, under-market house. It’s part of a nice neighborhood, the lot backs into a lovely wood, and if you walk through the wood there’s a beautiful calm lake. But almost immediately the cracks start to show. There’s a mold problem—but is it mold? The coworkers are all nice—but no one wants to seem to go beyond surface friendships, and the couple feel increasingly isolated in their new town. The wife suddenly develops large inexplicable bruises—and her excuses about bumping into things start to wear thin. Sometimes the husband is just at the lake. When did he walk to the lake? Why is it dark out? Plus, their parents won’t stop nagging them about having kids. (That not a haunting, that’s just real-life horror.) Jemc ratchets the tension up and up and up and never fumbles as she asks—is their fear all in their heads? Or is it the house?

The Good House, in Sacajawea, Washington, has been the Toussaint family home for generations, ever since the family matriarch, Marie, used it as a headquarters for her vodou practice, tending to the sick and creating a community. But that was decades ago now, and Marie’s granddaughter, Angela Toussaint, can’t wait to be rid of the place. Something turned in the house, and Angela knows it only as the reason both her mother and her son committed suicide. When Angela comes back to sell it, her trip coincides with a series of eerie events in the town, and she can’t help but wonder if the spirit of the house is somehow to blame. The trip that was supposed to signal a new beginning soon becomes a supernatural investigation as Angela has to dig into her grandmother’s past, the details of her son’s death, and the suspicion that her estranged husband might not be fully human anymore. Can Angela solve the crimes of the past, so the Good House will finally let her go?

Amanda wakes up in a clinic. She can’t remember why she’s there. A boy named David asks her questions, and as she answers them, she begins piecing her life back together. At least, assuming that any of what she’s remembering is true. She thinks she came to this town on vacation. She knows David’s mother. She says that only half of David’s soul is his own, because a healer needed to take half of it and replace it with half of a stranger’s soul to keep him alive. But David doesn’t care about that—he just wants Amanda to help him hunt for the “worms,” saying, “You have to be patient and wait. And while we wait, we have to find the exact moment when the worms come into being…” Schweblin takes us through parts of Amanda’s life, David’s, his mother’s, folding several speakers down into the memories and narration of another person. Along the way Amanda’s presence in the clinic, and connection to David, is tied into a story of nightmarish environmental pollution in Argentina. But while Amanda may talk about life outside the clinic, the reality is that it’s just the two of them, talking in a room. The book closes in around them in a perfect merging of claustrophobia and body horror.