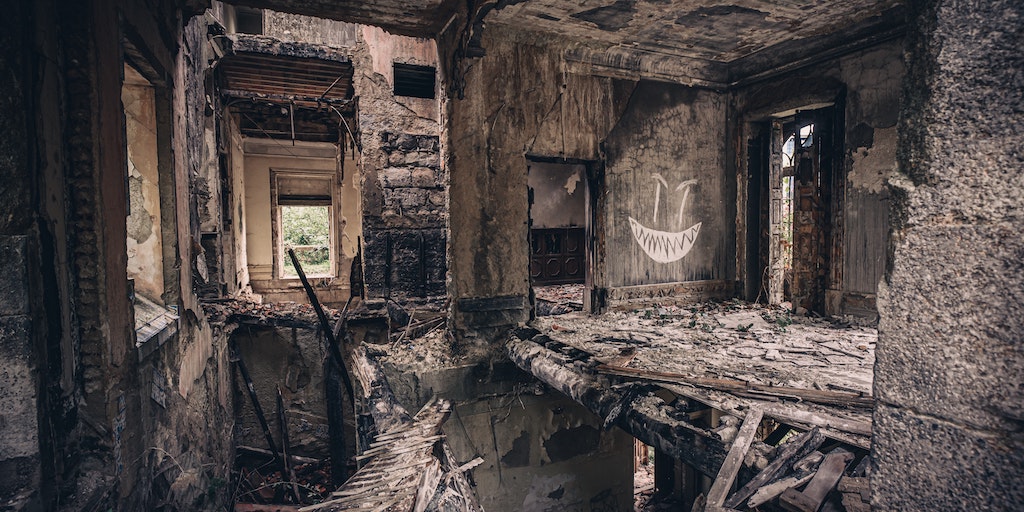 Photo by Maksym Kaharlytskyi on Unsplash

Alison Rumfitt’s Tell Me I’m Worthless–a dark, unflinching haunted house novel that takes readers from the well of the literary Gothic, up through Brighton’s queer scene, and out into the heart of the modern day trans experience–will be published by Nightfire in January 2023!

Three years ago, Alice spent one night in an abandoned house with her friends Ila and Hannah. Since then, things have not been going well. Alice is living a haunted existence, selling videos of herself cleaning for money, drinking herself to sleep. She hasn’t spoken to Ila since they went into the House. She hasn’t seen Hannah either.

Memories of that night torment her mind and her flesh, but when Ila asks her to return to the House, past the KEEP OUT sign, over the sick earth where teenagers dare each other to venture, she knows she must go.

Together Alice and Ila must face the horrifying occurrences that happened there, must pull themselves apart from the inside out, put their differences aside, and try to rescue Hannah, who the House has chosen to make its own.

Cutting, disruptive, and darkly funny, Tell Me I’m Worthless is a vital work of trans fiction that confronts both supernatural and real-world horrors as it examines the devastating effects of trauma and the way fascism makes us destroy ourselves and each other.

Here’s what Alison Rumfitt has to say:

“The predominant portion of Tell Me I’m Worthless was written during the first round of COVID lockdowns here in the UK, anxious and confused, at first living in a tiny room as a lodger and then, when that grew too horrifically isolating, back in my childhood bedroom; it is a book that grew out of being stuck inside of various rooms, staring at the walls and wondering whether I could see shapes growing in them.

It’s the novel I didn’t know that I needed to write until it happened, spilling out of me like a sickness. The title of the novel is not an invitation, although you are within your rights to take it as one.

I also kick myself for having the predictable guts to write about the phenomenon of the ‘Gender Critical Feminist’ which is growing in the UK, malignant on the organs of our cultural institutions, spreading vile poison into everything. In doing so I open myself up to attacks on my character from that crowd. If you’re still reading, I imagine you aren’t one of those. If you are, that’s weird, I hope this book prompts introspection of some kind. It probably won’t, though. This is a book about the difficulty of deradicalization, after all, and I don’t think one of the possible routes to that is to simply read one book and realize that your whole worldview is f-ed up.

Thank you to Nightfire for taking this book on and, dear prospective reader, stay away from houses that promise you the impossible.”

“I devoured this book in one sitting and haven’t been able to stop thinking about it since. It’s brutal, angry, and brilliant, and doing what I think horror does best – shining a spotlight on difficult issues. Tell Me I’m Worthless is a deeply uncomfortable read with an incredible voice and the most scathing social commentary I think I’ve ever read. I’m honored to be publishing Alison at Nightfire, and I can’t wait for readers to discover her work!”

Praise for Tell Me I’m Worthless

“With Tell Me I’m Worthless, Alison Rumfitt establishes herself immediately as a prodigious horror talent, her insight so razor-sharp it left me cut to ribbons. Chilling, bone-deep horror as humane as it is hideous. Tell Me I’m Worthless is ambitious, brutal, and brilliant.” —Gretchen Felker-Martin, author of Manhunt

“Rumfitt’s is an important book, as transgressive and trans as they come. This is the sort of literature we haven’t seen in the UK for too long, if not ever” —Isabel Waidner, author of Sterling Karat Gold and We Are Made of Diamond Stuff

“A sharp and visceral novel which bends the horror genre to its will. Tell Me I’m Worthless holds a gruesome mirror up to the way it feels to live now. I absolutely tore through this book” —Julia Armfield, author of Salt Slow and Our Wives Under the Sea

“Punk in every sense of the word, this is a debut unlike anything you’ve read before. Tell Me I’m Worthless builds a thoroughly British haunted house, and terrorizes its readers inside; Rumfitt’s horrifying talent shrieks out from every page and rings in your ears for days.” —Eliza Clark, author of Boy Parts

“The most startlingly original haunted house story I have read, this is intense, multi-layered and very, very creepy.” —Lucie McKnight Hardy, author of Water Shall Refuse Them

“Gripping, unsettling, compulsive, spicy, and, in the end, deeply moving. I loved it.” —Molly Smith, co-author of Revolting Prostitutes

“An exquisitely terrifying journey to the depths of fascist, transphobic Britain. Alison Rumfitt’s astute observations of today’s violent cultural landscape work only too well as a tale of gothic horror. But Tell Me I’m Worthless is also full of beauty, empathy and, ultimately, love. I’ll never forget this book.” —Frankie Miren, author of The Service

“There’s fascism in the rotten House of albion, and it’s getting worse; Alison Rumfitt’s superlative trans horror picks a fight with the poisonous state of modernity and fearlessly attacks it head on. Vital, thrilling, utterly alive.” —Gary Budden, author of London Incognita

ALISON RUMFITT is a writer and semi-professional trans woman. Her debut pamphlet of poetry, The T(y)ranny, was a critical deconstruction of Margaret Atwood’s work through the lens of a trans woman navigating her own misogynistic dystopia. It was published by Zarf Editions in 2019. Tell Me I’m Worthless is her debut novel. Her work has appeared in countless publications such as SPORAZINE, datableed, The Final Girls, Burning House Press, SOFT CARTEL, Glass Poetry and more. Her poetry was nominated – twice! – for the Rhysling Award in 2018. You can find her on Twitter @hangsawoman and @alison.zone on Instagram. She loves her friends.

Tell Me I’m Worthless will hit shelves in January 2023!

One thought on “Announcing Tell Me I’m Worthless, A New Novel from Alison Rumfitt”