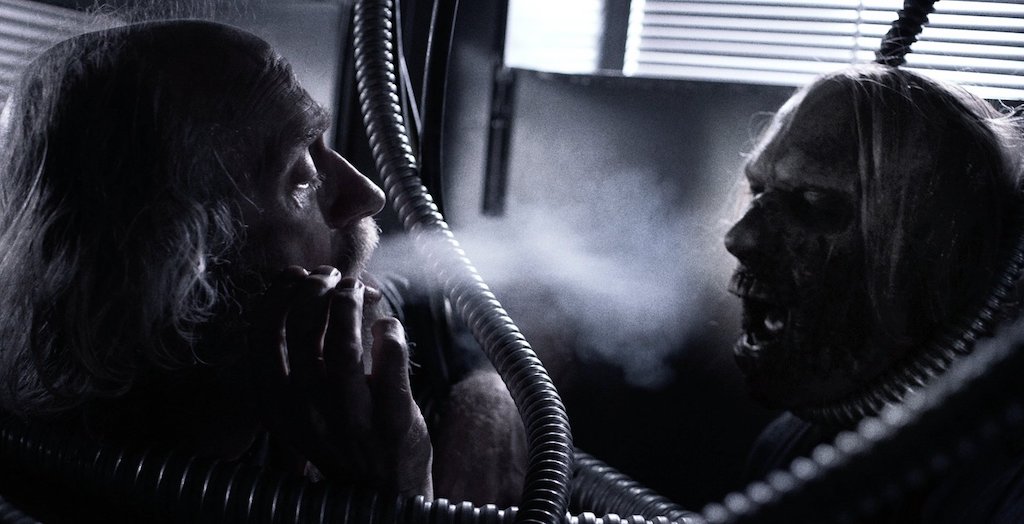 In my mid-twenties I went to see a late showing of Texas Chainsaw Massacre at my local theater. I thought it’d be cool/funny/a really good idea to get super stoned for it. But as the lights dimmed and the edibles kicked in, I had the striking realization that I could get too high for this. What if, like in so many stoner horror movies, I got so high that the horror on the screen became my real life?

It was silly but scary, one of those thoughts you only have when you’re really high and in the safe company of friends. Instead of leaving out of fear that the edibles would push me into unknown territory, I stayed. I’m glad I did; it was a great showing, I had a lot of fun, and was thoroughly scared by a movie that hadn’t frightened me since high school.

Weed can be like that sometimes. Even in horror movies, weed is either the thing that gets you killed or the thing that saves you. As a stoner, that layer deepens the horror for me, makes it realer, more relatable. That’s why I wanted to create this list of stoner horror movies, some of which feature weed as a plot point, and some of which are just really fun to watch while high.

If you smoke and watch horror, some of these are going to be obvious choices, but hopefully you’ll find a movie on here that’s outside your normal horror munchies menu.

A horror black comedy musical starring Rick Moranis, Ellen Greene, Tichina Arnold, Tisha Campbell, and a litany of other stars, Little Shop of Horrors straddles the fence between horror movies about weed and horror movies that are great to watch while stoned. Directed by Frank Oz of Sesame Street and Star Wars, Little Shop of Horrors is about an out-of-luck plant shop worker who finds a mysterious man-eating plant that promises to turn his luck around if he’ll only do one small little thing—kill. Though the plant in the film isn’t actually a weed plant, the struggles of growing and caring for a cannabis plant (or any plant, for that matter) can easily be transplanted onto Audrey Two.

The Cabin in the Woods is one of those secret horror movies. Most fans tend not to go into much detail about the plot of the movie past dropping a few quotes. I won’t give away the big reveal, but suffice it to say that it’s a horror movie about a couple of friends who go on vacation to a cabin in the woods where all manner of horror is unleashed on them. Personally, it’s not my favorite stoner horror movie to watch, but weed does play an integral part in the plot. With Chris Hemsworth, Fran Kranz, and Kristen Connolly, the stoner horror comedy is well-acted and not the worst way to spend an hour and a half getting high.

The first installation of the Scary Movie franchise is one of my favorite stoner horror movie parodies. It’s up there with Shriek If You Know What I Did Last Friday the 13th, A Haunted House, and Behind the Mask. I very clearly remember Scary Movie coming out when I was 10 and watching it on a terrible black-market VHS, but I still loved it. I didn’t understand all the jokes and references, but as I got older and weed became a part of my life, my love, appreciation, and understanding grew. Written by and starring both Shawn and Marlon Wayans (and directed by Keenen Ivory Wayans), the movie parodies and spoofs a number of popular 90s horror movies, like Scream, I Know What You Did Last Summer, and more. There are also a lot of great weed moments throughout the movie that make this an instant go-to stoner horror classic.

I actually heard about this movie first at my local dispensary a few years back. The cover and description didn’t grab me initially because it sounded too much like another movie about drugs, Shrooms, that came out a few years earlier. But I’m a stoner who loves horror, so eventually I watched it. Star Leaf, though not a great film, is a fun movie about friends looking for an out of this world strain of weed. There are other subplots and moments that feel like they just complicate the roughly hour-long movie, but if you’re in the mood for silly horror centered around stoners in the Olympic forest, then Star Leaf is your movie.

Troll 2, though marketed as a follow up to Troll, has no connection to the first movie and is actually about goblins—it’s nilbog spelled backwards! So, don’t expect to see any trolls or have any callbacks to the 1986 film. That doesn’t stop it from being a top horror stoner movie that can stand on its own, of course. The reason I love this movie so much as a stoner horror flick is because it touches on that common horror theme that this could be real, this could be your town, your home, your neighbors, all disguising their true identities as goblins.

Okay, so this movie is one that most horror fans I talk to have never seen. I always describe Don’t Go In The Woods as an indie horror slasher musical. The acting and dialogue aren’t great, but the songs are pretty amazing and clever, with covers and reprises throughout the movie to signal certain deaths and character development. Don’t Go In The Woods follows an indie band as they head into the woods to record “raw” new material that will hopefully land them a record deal. What actually ends up happening is way funnier and bloodier. As stoner horror, it’s a great one to watch if you’re a fan of silly slashers and indie music, but weed only plays a small role in the actual story.

Z Nation is the only show on this list, because I couldn’t not include it when talking about stoner horror. Weed plays a huge part in the series and is often used in a way to lighten tension, add humor, or medically help the zombies, blends, and humans on the show. Now cancelled, Z Nation ran for several years on the Syfy channel and is, in my honest opinion, the best zombie and post-apocalypse show ever created. It’s a horror comedy series about a band of survivors trying to cross North America in hopes of reaching a facility where a vaccine for the zombie virus could be made out of the antibodies one of them carries. I could spend my whole 4/20 just watching Z Nation because it has it all—weed, baby zombies, weed zombies, and a pansexual zombie messiah.

Snoop Dogg has been involved in several horror movies—Bones, Urban Menace, and Hood of Horror. A horror anthology movie starring Snoop Dogg as the narrator Hound of Hell, Hood of Horror follows a cast of characters living within the same inner-city neighborhood. This is another movie from my childhood that I revisited when I was older and higher. It’s got all the elements of a great B-horror movie and delivers on each one. There’re lots of cheesy lines and cringy moments, and plenty of buckets of blood. Great for fans of campy anthology horrors and hood horror movies.

When you think of stoner horror movies, Idle Hands is usually the first movie that comes to mind. The 1990s stoner flick (starring Devon Sawa, Seth Green, Jessica Alba, and Vivica A. Fox) is about a teenage stoner whose hand gets possessed by a demon on a killing spree. Because the main character is such a stoner, it takes him a while to even realize what’s happening, which leads to lots of hilarious moments, but none as great as the knitting needles and Rob Zombie scene. This is another one of those stoner horror movies that’s always at the top of my 4/20 watch list.

Maybe you’ve picked up on the fact that I’m a fan of horror musicals. If not, then I’ll come out and say it—I love horror musicals. I love the blood. I love the dance. I love the song. When high, music and art take on extra dimensions–the lines between us and the movement are lost. That’s why the 2018 Luca Guadagnino remake of Dario Argento’s 1977 giallo witchcraft movie is on this list. Suspiria is the only horror movie to ever make me cry. It’s beautifully made, with a soundtrack by Radiohead’s Thom Yorke, and stellar performances that tend to get stuck in my head. I’ve only ever watched this movie high, so I am extremely biased, but it’s great to watch high. With such well-choreographed dance, magic, and death sequences so well-choreographed, it’s hard not to think of Suspiria as a great stoner horror movie.

Now that I am older, stoned-er, and more versed in the horror genre, I find stoner horror vindicating. These movies let me know there’s a place in the dark for the chronic, either as a way to loosen and ease your nerves and anxiety during a run from zombies or as a way to take your mind off that noise you heard that’s totally not an immortal embodiment of evil.

Weed and horror combine to make an experience that’s both relatable and funny. Watching horror movies when stoned can be hair-raising or gut-clenching (from all the laughter). The experience is subjective, different for each viewer. For instance, during my research into stoner horror movies, an old friend told me that they think body horror is the best subgenre to watch while stoned. I’ve been there and watched that—I can undoubtedly say that no, that viewing experience is not for me.

What’s your flavor of stoner horror? What mellows you out, or stimulates your mind in the realm of smoke and darkness?