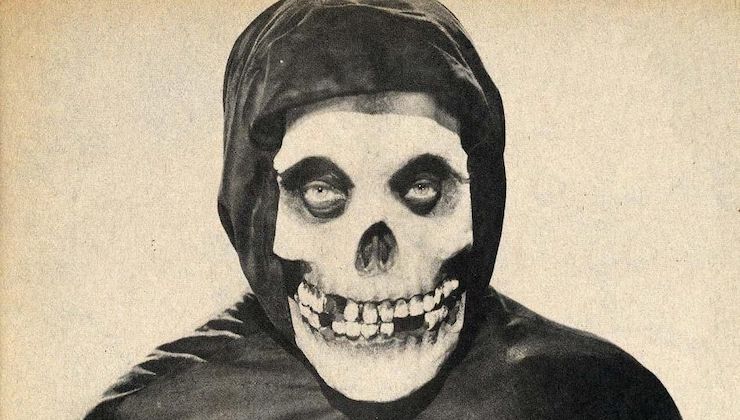 Listen man, New Jersey is weird. Trust me on this. I’ve lived here for over twenty years and it still manages to confound me by just how much strange can be packed into one state. We even have a long running magazine that’s literally called Weird New Jersey dedicated to chronicling the crazy shit in this place. There’s just something in the water here. We’ve got the Jersey Devil, we’ve got the Shore, and we’ve also got one of punk’s weirdest bands, the Misfits.

Punk music is one of my favorite genres. It was a catalyst, striking like lightning in England in the 70s and created several brand new subcultures like a match set to dry kindling. Ask people to name a punk band and most will say the Sex Pistols, the sneering jerks who became the poster boys for the movement despite only releasing a single album. But punk is so much bigger than the Sex Pistols and encompases so many different themes and tropes. It’s political, feminist, and yes, it’s also spooky.

Many punk groups over the years have flirted with horror. The Cramps famously lent a song to The Return of the Living Dead soundtrack. The Damned have the honor of being the first punk album out there, beating the Sex Pistols by several months. Their lead singer, Dave Vanian, also has the distinction of being the first person we can pinpoint as what we now consider “goth.” He stalked around the stage in white face paint and black Victorian frock coats all the way back in 1976. But while other bands certainly used horror to great effect in their work, but no one did it with such utterly batshit, grinning zeal as The Misfits. I mean, what else are you going to do in New Jersey?

The Misfits are a fucking mess. Hailing from a town called Lodi, they can charitiably be called “troubled” as a band and the fact we have any music from them at all is a minor miracle. One of their seminal albums was recorded in 1978 and didn’t get released until 1997! They straight up shouldn’t have worked as a band. They sound like complete dogshit, which is part of the hilarious appeal of them, really. I know most people think punk rock is incomprehensible noise (they’re wrong, mostly) but the Misfits are truly the most incomprehensible of them all. So what makes these dipshits special? We can lay that at the feet of the Misfits’ masterminds, singer Glenn Danzig and bassist Jerry Only.

Glenn Danzig, taciturn asshole that he is, started the band in the 70s after short stints in other local groups. He roped in Manny Martinez who was a friend from his from a former band to play drums but was unable to find anyone else for the new group. One day, walking home from work, Manny spotted a neighbor taking a bass guitar out of his car and asked if he wanted to be in a band. Jerry Only, who had received the bass a few days earlier and never actually played it before, accepted. (The old punk adage of “here are three chords, now go form a band” isn’t actually wrong!). Only and Danzig bonded over a love of shlocky, terrible horror movies and flung that passion into the band, gleefully pouring corn syrup blood all over their lyrics and writing odes to aliens, Halloween, zombies, slasher flicks, and the Kennedy assassination (I mean, I guess that counts?). They quickly began recording, the songs barely formed and the instruments inexpertly played. These songs would go on to become their album The Static Age, which wouldn’t see the light of day until almost thirty years later and yet contains some of their most iconic work. Like I said, they just shouldn’t work as a band, and yet…

The Misfits immediately stood apart from the local punk scene, still mainly influenced by the cool of nearby New York City’s CBGB and the bands that haunted it, like The Ramones, Patti Smith, and Television. The Misfits painted skeleton bones on their stage clothes, adopted Halloween monster face paint, and Only slicked his hair forward between his eyes in a style he called a “devil lock” that would eventually be copied by other horror punk bands. In short, they completely stood out. Add in Danzig’s booming deep voice, unusual for punk, and they were incredibly eye-catching and attention-grabbing.

Just as soon as they were a band, they started to shed members. The original drummer left, they changed guitarists like some people change underwear, and found themselves frequently scrambling to get people to fill in for shows. The only constants were Danzig and Only, and even that wasn’t for sure. After a disastrous, aborted UK tour opening for The Damned in 1979, during which they only played two shows, Danzig and Only stayed in London for a while. England would be an interesting time for The Misfits. Danzig got arrested for fighting with skinheads and spent two nights in a Brixton jail, something that would go on to inspire the song “London Dungeon.” The band limped home, one guitarist lighter (again), and tried to go back to playing shows. Only’s brother, who took up the stage name of Doyle, would soon join on guitar and the band did their best to stick together and release an actual album.

The Misfits had previously (and haphazardly) released a few singles but hadn’t yet managed to get a full album together. The most well-known EP is probably 1979’s Horror Business. It features the first appearance of the band’s iconic mascot, the Crimson Ghost. “Borrowed” from a mostly-forgotten horror film serial from the 1940s of the same name, the figure is a crudely crafted skeleton in tattered robes. It’s a sneering, grinning creature and seemed to fit the band’s whole deal to a T. The Crimson Ghost swiftly became the band’s mascot and Danzig would screenprint t-shirts in his mom’s basement with the creature on it under the band’s oozing, dripping name. If you don’t know anything about this band, you sure as hell know the mascot. That skeleton has become one of the most famous mascots in all of rock music, right up there with the Rolling Stones’ tongue or David Bowie’s Aladdin Sane lightning bolt. How many t-shirts do I own with this guy on them? Don’t ask.

Finally, in 1982, their first official album was released. Walk Among Us is the quintessential Misfits album. It’s heavily influenced by terrible horror b-movies from the 50s and the cover shows the band in their weirdest stage finery standing before a UFO and a giant alien bat spider creature. Say what you want about the Misfits but they fully committed to their shtick, and for that we thank them. The songs on Walk Among Us are iconic, including “Astro Zombies” and “Mommy, Can I Go Out And Kill Tonight?”. Despite the poor sound quality of the album (a Misfits hallmark by now), the album was incredibly well received by critics and fans alike and still gets a top ten spot in most “best of punk” lists.

But Meghan, you may ask, WHY was the sound quality so incredibly bad? I am so glad you asked! Most of the time The Misfits recorded where they could with whatever money they scraped together, making the process uneven and messy. It’s pure punk DIY ethos. Unhappy with how the vocals or instruments sounded, they would often overdub parts of the songs, making them sound muddy and grainy. “Mommy, Can I Go Out And Kill Tonight?” was recorded live and then Danzig re-recorded his vocals later, so they don’t even sync up exactly right. I think the janky nature of nearly everything The Misfits did is part of their charm, honestly. But, man, do they sound like they were recorded by microphones in the attic of a house while they’re playing in the basement.

After doing all that work to get an album out and doing a huge American tour (during which they got arrested in New Orleans for grave robbing, because sure, why not), the band utterly broke down a year later. Danzig went on to start new bands while Jerry and Doyle Only moved back home, helping out in their father’s factory. Danzig’s success brought new ears to the Misfits and this sparked a vicious, long-drawn-out legal battle with Only over royalties, which fractured the Misfits even more.

After a legal battle that took over ten years, Only gained the ability to resurrect the Misfits name without Danzig and tour under it. This new version of the Misfits released new material, still using horror as their guiding light, though critics weren’t as fond of this new incarnation of the group. If anything, they tried too hard to be gruesome and horrific, and it came across inauthentic and manufactured. Danzig and Only continued to be antagonistic towards each other for years, though they often teased getting together to do shows as the “real Misfits” again and headlines about a reunion tour would pop up often in music magazines. They managed to pull off a tour together in 2016, after years and years of additional legal battles.

Despite the absolute disaster that was The Misfits, they are without question one of the most influential punk bands and their special brand of horror is legendary. They singlehandedly built the horror punk genre, and countless bands owe these Jersey weirdos a great debt. Davey Havok of AFI rocked a devil lock for years and notably covered “Halloween” on their first EP, updating the song for the faster hardcore sound that horror punk slipped into in the 90s and 2000s. Fellow Jersey weirdos My Chemical Romance were famously fans of the group and even recorded a cover of “Astro Zombies” for that most important and storied honor, one of the Tony Hawk Pro Skater video game soundtracks.

The Misfits defy all logic and reason. I’m still not convinced Glenn Danzig didn’t sell his soul to get them off the ground, because everything they did was chaos that would have left lesser bands in the dustbin of music history. The fact that we have any music from them at all is impressive, considering their recording “process” and the extensive legal battles that followed. They almost feel made up, like a punk version of Spinal Tap in a shitty horror movie. The fact that they’re real is, frankly, insane. That’s the power of horror, though. Danzig needed to sing about aliens and zombies so badly that the Misfits persevered through sheer force of will.

Join me next time, when we shift genre gears again to talk about that most horrific thing of all, pop music. Yes friends, it’s spooky season, and it’s time to talk about one very special music video. Everybody, rock your body…

2 thoughts on “Horror Is Metal: Misfits, The Band That Wouldn’t Die”