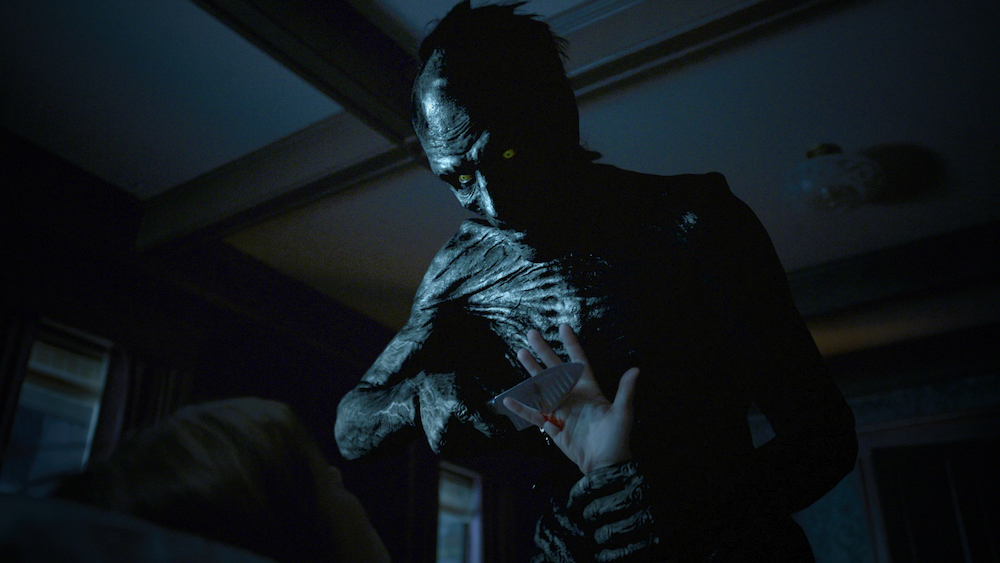 Maybe she's got sleep paralysis, maybe it's a literal demon.

Before diving into the nitty gritty of the review for Evil, I’ll start by simply saying:

STOP WHATEVER YOU ARE WATCHING AND WATCH EVIL.

Now that that’s out of the way, let’s dive into the spooky and the real.

Evil, created by Michelle King and Robert King of The Good Wife fame, recently came to Netflix. I first found out about it through another review on Tor.com, and to be honest, I didn’t read the review initially. What hooked me was the image of a Black woman cradling this horrific abomination like it was her cute bumbling baby and the title ‘You Should Be Watching Evil.’

I’m a lifetime fan of the procedural horror detective show and grew up on So Weird, The X-Files, and Supernatural—along with countless other supernatural sleuth shows. But I had never heard of this show that seemed to have a dark yet comical feel to it. So I did what I instructed everyone to do at the beginning of this article and stopped my watchthrough of Haunting of Bly Manor and Lovecraft Country to see what this show was all about.

In Evil, the things that go bump in the night have real-world scientific or technological sources, but—and here’s the scary thing—they also have horrific and supernatural sources as well. Within a season of thirteen (yup! they invoke the unlucky number) episodes, the series explores multiple types of possession, systemic racism, stalking, and more everyday and religious evils. Evil states many times over that no matter what language you use, evil is real and it’s trying to influence all of us every second of our lives.

Therein lies one of the biggest horrors of Evil. The uncertainty that will tug at you while you’re eating, breathing, shitting, and bathing: are you being haunted—slowly possessed—or are you just having a bad mental health day, week, month, year, etc. because of elements outside your control? It also offers this terrible sort of dreamworld where stalkers, incel attackers, murderers, corrupt doctors, and all those other inky black things that infect our lives are written off as demonic, something that can be roughly banished through rituals and belief.

But then, if that were the case, we would all be susceptible. We would all be capable of extraordinary evil. And there again, comes a quiet horror of Evil.

Evil is like Black Mirror and Scooby Doo all mixed together. The main characters that make up the supernatural detective crew (Ben, Kristen, and David) work together in this symbiotic space of both contradiction and respect. Though Kristen and Ben both don’t believe in the supernatural, they each have their own way of looking at the causes behind the various eerie happenings they investigate. Ben (Aasif Mandvi of The Last Airbender) is the tech-savvy one who banishes ghosts (who are really just creepy guys lurking inside games looking to corrupt the innocent). Kristen (Katja Herbers of Westworld), on the other hand, uses her knowledge of the human psyche to recognize possessions as people in crisis in need of a mental health practitioner, not an exorcist.

And David (Mike Colter of Luke Cage), a priest in training who believes that no matter how you see the world, evil in all its forms must be stopped, is sort of the perfect leader. He listens and defers to Ben and Kristen because he genuinely respects who they are and what they bring to the table. There are, of course, some hiccups to their interactions but their issues and conflicts only deepen their relationships and the viewers understanding of who each of the characters are and what they value.

Despite all of the evil and darkness around them, at the center of it all they are just average people who want to make others see that there is evil in the world, but that it isn’t to be feared. It should always be stared in the face and called out by name. Kristen, Ben, and David are confronted throughout the series with chilling people and events, but they never turn away. They never pretend that evil does not exist. For me, this is the lesson to be taken away from the show. We must not be afraid to investigate evil, find its source, and vanquish it. Evil is a show that inspires us all to act in the face of oppression, racism, and hate.

The show is not without its faults, however. There’s a feeling toward the end of the season of biting off more than it can chew, bringing in apocalypse prophecies within the last couple of episodes and then not giving us any answers. There’s also the ill-handled romance between Ben and Vanessa (Nicole Shalhoub of The Good Fight), an arc that’s way too short and left unfinished. That coupled with the general cliffhanger atmosphere of the final episode leave the show feeling incomplete. There are subtle and well-done cliffhangers throughout the season, though, that leave viewers questioning whether or not demons and devils really do exist in this world, our world.

But the season’s final mystery is left absolutely unresolved or even really examined. The viewer is simply left to wonder. With everything going on, I am left scratching at the future for more Evil, for answers. Though Evil has been renewed for a second season, production stoppages due to Covid-19 leave viewers hanging with no end in sight. Will the final mystery ever be solved or will the fate of the characters and show hang forever, swinging between fan theory and fan theory while the world crawls through this pandemic?

All in all, though, Evil is fun, scary, and informative. You’ll never look at your home assistant, doctor, or partner the same way again. It makes you question the world around you and the limits and depths of the people you call friend, family, and foe.

The first season of Evil is available to stream now on Netflix and CBS All Access.