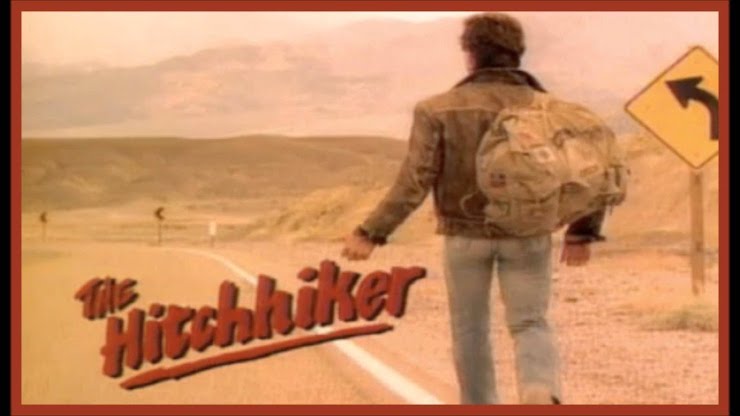 As a longtime fan of horror anthologies (whether in print, film, or televisual form), I find myself occasionally returning to examples from the past for a reappraisal. As shows like Black Mirror and Jordan Peele’s re-imagined Twilight Zone have sparked a returned interest in the format, it’s interesting to look again at some predecessors, as anthologies tend to get short shrift in genre histories: they don’t have the emotional heft that an entire narrative series generates behind itself, and while their best episodes often stick in the memory, the weight of weaker examples tends to drag this memory down.

In all honesty, I hadn’t ever expected to rewatch HBO’s mid-1980s anthology series The Hitchhiker, but after stumbling across an interesting online reference (apparently, the first three “trial” episodes were adaptations of EC comics stories, as William Gaines was making an attempt to monetize his legacy), I thought I might give the first season a try – as it turns out, this actually meant the first TWO seasons, as the show began with a “season” of only 3 episodes, before being picked up for another 10 episodes (ostensibly the second “season”). For purposes of this essay, we’ll consider all 13 as one season (there have been some DVD releases, but streaming availability is spotty).

In each story of this series, we are introduced to that episode’s main character by the weatherbeaten titular figure, a scruffy enigma who may (or may not) directly interact with said character before moving on, but not before voicing some pointed and portentous words to set things up. With the background knowledge that the initial episodes were EC adaptations, The Hitchhiker‘s position in the genre’s landscape becomes more apparent – essentially, the show served as a dry run for HBO’s successful, long running Tales From The Crypt series (which would launch in 1989, 2 years after The Hitchhiker left HBO for the USA Network) – albeit with more sex and less gore. In a sense, the series can be seen as “Creepshow-lite meets The Red Shoe Diaries,” complete with a different type of “horror host” – one who is presented more in the vein of mysterious Rod Serling type than the cackling, sardonic Crypt Keeper. The figure of The Hitchhiker is initially played (for the first three episodes) by the somewhat baby-faced Nicholas Campbell, before Page Fletcher takes the role for the rest of the show (it appears the openings with Campbell were later reshot with Fletcher for syndication & continuity purposes). With neither the charisma of Serling or the dark puppet humor of The Keeper, Fletcher’s may be one of the easiest gigs in TV history – just mouth a few ominous words and then trudge off screen. The episodes feature a wide array of acting talent, including established actors like Klaus Kinski, Shannon Tweed, Karen Black and Robert Vaughn.

The stories themselves are generally ironic comeuppance stories and softcore psychodramas, all very mid-80s, and, this being cable TV, the viewer gets “edgy” & contemporary subject matter (sex, drug use, infidelity, transgender characters, video art, etc.), which is treated unevenly and sure to rub some current viewers the wrong way. The main focus tends to be on the story as a vehicle to showcase softcore sex, nudity, and some violence – and while that may not sound promising there are a few solid episodes worth a second (if somewhat jaundiced) look.

Episodes like “Lovesounds” (Klaus Kinski murders his adulterous wife and her lover, only to have his high-tech audio system turn on him), “And If We Dream” (a teacher who dumps the student he’s been having an affair with finds she can invade his dreams), and “Petty Thieves” (a drug dealer finds himself transformed after his girlfriend is killed, only to suffer at the hands of the mob) are not really worth anyone’s time. Promising episodes like “Videodate” (a misogynistic creep gets what’s coming to him at the hands of a video artist) and “A Time For Rifles” (featuring a love triangle between a wife and two Vietnam veterans) drop the ball, with the former reading as an uninspired, shallow gesture towards Videodrome and the latter scotching its interesting commentary on guilt and war with a tacked on, afterthought ending.

“Shattered Vows” (a cheating fiancee runs afoul of magic), “When Morning Comes” (a womanizer in cabin mistakes an identity and gets his just desserts) and “Split Decision” (mentally unbalanced sex-bomb twin sisters both love the same man – what to do?) comprise the show’s initial trilogy and are somewhat stronger for being adaptations of compact source stories: “Vows” has a nicely bloodless dismemberment climax, and “Split”‘s comic tone helps to sell it. While “Man At The Window” (a creep uses surveillance equipment to further his goals), “Hired Help” (harried, high-powered businesswoman mistreats her immigrant help, and is cursed for it) and “Murderous Feelings” (a woman is forced by her therapist/lover to act out her recurring murderous train nightmare) might all fail at being good episodes, they each have qualities worthy of comment: “Window” is more ambitious than usual and has some exciting motorcycle footage, “Help”‘s ‘glowing eyes’ visuals are surprisingly effective, and “Feelings” has a rare, near Euro-horror quality with trippy effects and a Giallo-esque presentation at times.

But there are two episodes in this initial offering that are worth a look. “Face To Face” comes closest to Tales From The Crypt territory, with Robert Vaughn as Dr. Christopher Hamilton, a plastic surgeon and cocaine addict who performs delicate surgery to make Lena Russell (a trans woman) look more feminine – but as he is under the influence at the time, he botches the job horribly. Surprisingly (for the time, at least), Lena is portrayed sympathetically, although that character note is qualified by the usual lurid revenge ending. On the other end of the spectrum is “Remembering Melody,” an adaptation of George R.R. Martin’s short story of the same name, where high-powered lawyer Ted is visited by his long-lost hippie ex-girlfriend Melody, who accuses him of selling out before committing suicide – or is it all just a vision? It’s more straightforward most of the other episodes, and the compromises here (between an adult story and “adult” content) reminded me a bit of the uneven Robert Aickman adaptation on another “sexy” genre anthology show, The Hunger.

If you’re at all interested in how genre anthology shows disported themselves in the 1980s, you may want to use this article as a guide to catch up to The Hitchhiker, who still wanders the lonely backroads of the internet, looking for a ride…

2 thoughts on “On The Road: A Look Back At HBO’s The Hitchhiker”