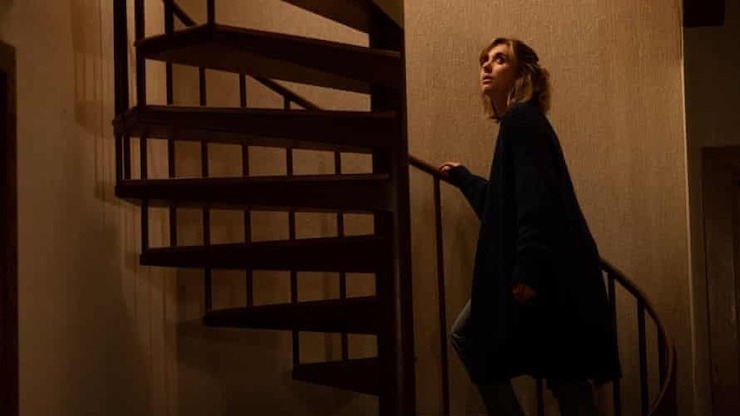 This article is meant for semi-humorous purposes. If you ever find yourself cornered by a masked killer, use your own best judgment or discretion. Of course, if this article helps you escape an encounter with a slasher, then feel free to tell us in the comments below!

Since the advent of the slasher movie, one question has gone unanswered, and one that seems relatively obvious: why do the prospective victims always run up the stairs? It’s a move that’s been joked about in interviews, disparaged by those who wish to “elevate” the genre (whatever that means), and become something of a punchline. But time and again, for seemingly unspecified reasons, we keep seeing victims book it up the staircase rather than do something like bolt further into the house or run out the door. It seems like a no-brainer to the average fan: why go further into a place where a masked killer can corner you and perfect his teppanyaki routine on you while you scream in terror, when instead you can easily increase distance or find a place to leave the house entirely and find somewhere safer? As it turns out, there are quite a few reasons, and some very good ones for people who like all their blood and organs on the inside of their bodies. So please sit back, lock all the doors and windows just in case, and enjoy this investigation into why running up the stairs might save a slasher victim’s life.

First, to head off the inevitable comments and nip a few arguments in the bud, let’s set some boundaries on the descriptions. This article only covers “prowlers,” or the kind of killers who stalk neighborhoods and gain access to their victims’ houses. Obviously if you’re so deep into Texas that you’re being chased by Leatherface, things have already gone too wrong for this argument to be useful, and if you’re dealing with a summer camp slasher, you won’t be running up to the second floor of a single-story cabin. The kind of masked killer in this scenario is highly mobile and a lot more community-focused. Think Michael Myers from Halloween, Ghostface from Scream, the first season of Slashers, or killers like that. The kind who chases someone down the street with a knife or hides in someone’s closet for quick kills. We’re also not discussing the blatantly supernatural slashers, as running is usually a moot point in that case. We’re talking about basic, human-like killers who choose a large area for hunting and move a lot from place to place.

With all of that settled, it’s time to talk about persistence hunting. Persistence hunting is an animal behavior that involves stalking prey over long distances, keeping pace while conserving energy until eventually the prey collapses and the hunter can easily shank them in the kidney. It’s a behavior everyone’s seen in horror movies before, even if you don’t know the name for it–how many times have you seen a character in a slasher film bolting down the street hysterically while the killer lopes along behind, taking a pleasant stroll down the block? That’s persistence hunting (also known as the Pepé Le Pew). What this means is that on the straightaway, the average victim is kind of boned, since most people will tear off at a sprint and try to get as far away as possible, only for the killer to catch up when they’re taking a rest and give them a violent anatomy lesson. The best way to get some distance between yourself and any implacable monsters would, of course, be to change up the terrain a little. This is where the stairs come in: it allows the victim to get some height and distance, and also shifts the chase to more difficult terrain. Yes, it means you have fewer exits, but at the same time, you’ve changed the variables and possibly bought yourself a little extra time.

Changing that terrain also means that whatever masked killer has broken in doesn’t have the home field advantage, either. People don’t know as much about the upper floors of a house, as it’s usually a closed-off area without as many windows and views. It’s also a hive of smaller, cramped corridors and a lot of doors that might be closets in disguise. The less someone knows about an area, the more they end up slowing down to search and explore said area. In horror movies, even knife-wielding maniacs aren’t immune to this impulse. There’s always a tense scene where a killer yanks open every door, getting ever closer to the would-be protagonist, and that only speaks to the power of knowing the layout of a building when a crazed murderer intent on your dismemberment does not. It can buy a few extra seconds, and any wiggle room when being hunted by horror movie villains is absolutely vital to survival. Plus, there’s at least the (incredibly) slim chance that they won’t find you, since they have to check multiple doors and you could possibly try and work out your options while having that panic attack in hiding.

Finally, there’s one advantage no one really talks about: weapons. While weapons in a slasher film scenario seem kind of useless (especially since, more often than not, the killer just gets back up again), if your attack works, it again opens that little window of opportunity and buys you a few more seconds. Sometimes, it can even put the slasher down for the count, depending on luck, skill, and the element of surprise. Most people don’t keep too many potential weapons on the first floor. Usually, all the stuff that might do damage is kept in the bedroom or another personal room, which, again, tend to be on the upper floors of a house. Much like running up the stairs, the “baseball bat or other blunt object under the bed” trope is a time-tested one in slasher movies, usually (as in real life) resulting in injury to the wrong person. But if you’ve done a little advance planning (or are at least a quick thinker) and can make it up those stairs to your blunt object of choice, you just might tip scales in your own favor.

Hopefully this clears up why it’s not as “stupid” as it seems to make a break for the stairs. When being hunted down by a masked killer, it’s really about buying as much time as you can and giving yourself every advantage possible. If they’re already in your house, you need every single advantage you can get, so changing up the terrain, breaking line of sight, maintaining home field advantage, and grabbing something you can use to fight back are all really smart choices to make. After all, it worked for Laurie Strode in Halloween, and not only did she live to the end of her encounter with a slasher (and poke him through the eye with a coat hanger), she’s lived to the end of multiple slasher encounters. So next time you see a slasher victim book it up the staircase, maybe hope they get the extra few seconds they need rather than wondering why they’re doing something so dumb. Sometimes that flight can save a life.

4 thoughts on “Running Up Those Stairs, or An Investigation Into Why Slasher Victims Make a Break for the Second Floor”