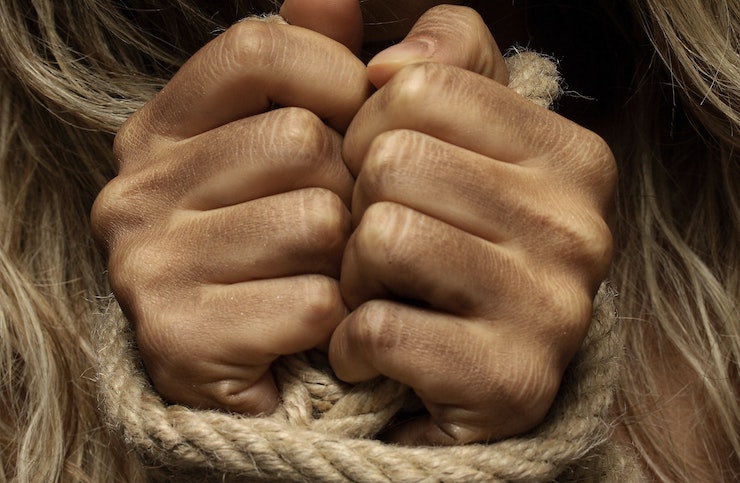 Photo by engin akyurt on Unsplash

Mendal W. Johnson’s Let’s Go Play At The Adams’ has a reputation.

It’s been called vile, evil, and harrowing. It’s been referred to as the most disturbing book some people have ever read. Reviewers have talked about burning their copies after reading it, of throwing the book away, of removing it from their presence the moment they finished reading it. No fewer than two people have written “sequels” giving it a much happier ending, restoring some optimism to the gruesomely bleak final moments.  It’s a book that has a profound effect on people, one that keeps horror fans looking for it almost as much as it makes them breathe a sigh of relief that it remained (until recently released as part of the Paperbacks From Hell collection of reprints) incredibly scarce.

It earns every word that’s ever been said about it. Here’s why.

Let’s Go Play At The Adams’ begins with a very simple premise. Barbara is hired to work as a babysitter and caretaker of the Adams’ house and their two children, Bobby and Cindy, while they spend a week away. One fine morning, she finds herself tied spread-eagle to the bed, gagged with a washcloth, and under guard by Bobby, Cindy, and their friends. At first it seems like a game to the kids, but as the captivity continues, they find themselves getting bored of just having a prisoner and think up fun new games to play with their “toy” while Barbara tries desperately to appeal to their humanity and escape. Eventually, as all these stories do, it becomes a battle for survival, because if they let Barbara go, she’ll probably tell and they’ll get caught, but the longer they keep her prisoner, the more she becomes a living, breathing burden that they have to either let go or kill eventually.

Horror usually works at a remove. Because we’re being shown something terrifying or disturbing or just kinda squicky, there’s a distancing that authors do, whether it’s the injection of black humor, the killer being a masked unstoppable monster, or simply the evil torturer being so horrifyingly evil that they couldn’t possibly exist. The torture methods are too elaborate, the killer is a machete-wielding clown… there’s something there that makes it difficult to believe in, something that tells you “this is fiction.” Hell, even the usual ending, which usually finds the protagonist fighting desperately against the evil, is kind of a distancing, a kind of evening of the odds. And Let’s Go Play At The Adams’ refuses to give you that distance. Barbara is intelligent, but between her decision to continue trying to appeal to the humanity of her captors (whom she thinks of as “just children”) and her reluctance to hurt children even when they’re torturing her, she ends up in worse and worse positions. The children themselves (who in a perverse parallel to childrens’ adventure novels call themselves the “Freedom Five”) aren’t portrayed as complete monsters, but with a certain naiveté that makes it all the more terrifying–to them, they’re playing a game. That they’re playing the game for real and not just pretending to hurt people only makes it more exciting, and it’s this weird lack of malice that makes it all the more awful that they’re doing these things.

We also get a look into both the interior lives of Barbara and her captors. The children, apart from their horrifying actions, are made to look as much as they can like people. Immature, terrifying people who do whatever they feel like because they can and think up convoluted justifications for why they should hurt a human being as part of their game, but people nonetheless. Hearing Barbara’s thoughts as she’s continually put in helpless situations makes you wish she could break out, and forces you to care about her as she slowly loses her mind. Giving the Freedom Five their own interior lives and thoughts, normalizing them but not humanizing them, ups the horror because we can’t point to these children as some kind of monstrous aberration. When asked why they can’t just stop, they still give childish justifications like “we’re playing a game and you lost,” or “we just can’t, that’s all, we all voted.” There’s nothing elaborate or ungrounded about any of it, and it’s one of the many details that reminds the reader these are, more or less, ordinary children.

In that brutal and matter-of-fact tone, there’s a further horror in just how the captor and captive think of each other. In Barbara’s internal monologue, laid out in page after page of agonizing detail, she vanishes further inside her own head as her situation turns helpless, at one point resorting to the idea that if she can wound her captors, if she can mark them in some way, then that would be enough, since escape is almost impossible. Meanwhile, the narration from the Freedom Five’s point of view continues minimizing Barbara’s presence until finally they stop thinking of her as a person at all, instead referring to her simply by her pronouns, and then in the end as “it.”

The emotional beats are played just as evilly and with just as much cutoff as anything Barbara experiences, showing us an open door and then immediately and cruelly slamming it shut, closing off every exit on the route to Hell one by one until there’s no escape. It’s a book that wants you to hope, because then it can torment you more as it shows you just how vain that hope was. Even the epilogue, showing the aftermath of the grisly double murder at the climax, seems to be mocking the reader, asking questions about the eventual fate of the Freedom Five and waxing philosophical about how good things and good people can’t exist in the world. It’s cruel, but then so is the book and its ideas of life and narrative.

For all these reasons, Let’s Go Play At The Adams’ is not a good book. “Good” seems reserved for books you’d recommend to your friends, books you’d want to read again. Let’s Go Play… is effective. It wishes to deliver a brutal and horrifying narrative about the dynamics of power and children’s lack of empathy, about what happens psychologically to both a hostage and hostage-takers, and about how easily someone can twist into something unrecognizable with the wrong push. It’s a bleak and brutally efficient read. It refuses to give its readers comfort or a safety net, instead forcing them through its twisted human interactions. It is exactly the book everyone warned you about.

3 thoughts on “Tales From the Backlist: Let’s Go Play At The Adams’ Is The Book You Were Warned About”